No one wants to be welcomed by an intruder when they get home from work, but what if the intruder is a cute koala?
Nikki Erickson came home from work and was surprised to find a koala in her room. What surprised her more is that the koala looked like the koala was pole dancing! Nikki took photos of the koala and commented that the adorable animal was very nice and did not seem to be bothered by being photographed. A dancer comfortable in front of the camera, this koala might just be preparing herself to become the next star! 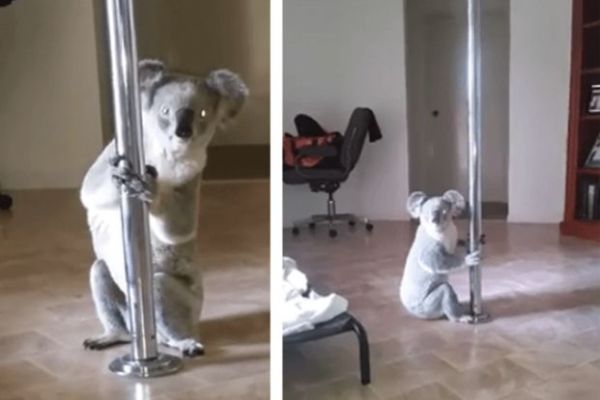 She uploaded a video that captured how the adorable animal tried and tried to climb the pole and eventually slid back down to the floor. The video has generated more than 300, 000 views.
In her post Nikki also added “She wasn’t so impressed with my shiny, slippery chrome tree but definitely made the ladies at Daisy Hill Koala Conservation Rescue day. [sic]” She called Daisy Hill Conservation Park, an animal rescue group, to get the koala back to her proper home. The rescuers arrived and also confirmed the gender of the cute koala. The adorable animal is apparently female and the rescuers named her as “Larissa.” The animal rescue group made sure that the koala was in good condition before they sent her back to the wild.

This is not the first time that a koala was found in the houses of Australia. According to Hunter Koala Preservation Society, it’s actually becoming more prevalent because the habitat connectivity is not the same as before.