Usually, people pick their pets and not the other way around. However, a stray dog spotted during the 4 Deserts Gobi March in China had set her eye on a runner and was determined to win his heart. Her journey across China’s largest desert will melt your heart.

On the first day of the 6-day marathon, a stray puppy was noticed running alongside the human participants. Surprisingly, she was able to keep up with them for the whole 22-mile stretch. Dion Leonard, a Scottish extreme marathon runner, noticed her but assumed she was just lost. When the animal made another appearance on day two, he realized she was as dedicated to the cause as he. 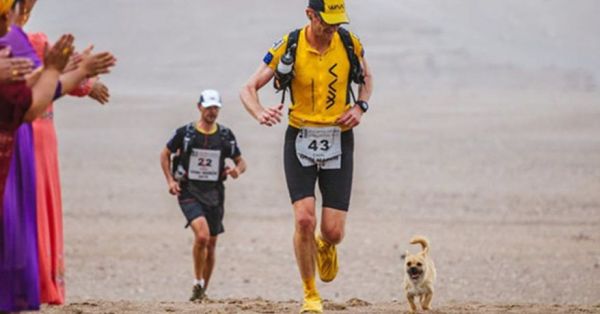 Still, Leonard thought that the dog would soon give up because the race was too much for her little legs. But the animal proved him wrong when she stayed by his side and finished the second stretch with him. Soon enough, they were inseparable.

On day 3, they were seen running close to each other. Leonard then named his new best friend and running partner Gobi.

The weather on days 4 and 5 were too much for the dog so she had to sit them out. The organizers gave her a ride and at the end of each day, she was seen waiting for Leonard’s arrival.
Fortunately, Gobi was able to join again on the last day of the marathon, and the two friends finished together.

After the event, Leonard couldn’t bear to separate with the puppy so he planned to bring her home to Scotland. However, the process won’t be an easy one. It would involve money, medical check-ups, and months of quarantine.

All the trouble in getting a dog cleared to enter the UK were not enough to discourage Leonard, though. Determined to bring the Gobi home, he had set up a CrowdFunder page so people can donate and help cover her moving costs.

For now, Gobi is staying with Leonard’s friend in China. However, with the support from people all over the world, they might be reunited soon. Let’s hope that they do.